Getting Ready for the Odyssey

How it Started:
It has been a long and winding road to the 4th of December 2009.  The fact of preparing for such an odyssey across the terrain of Africa, at best takes courage, love of adventure and some 'I don't care attitude', and at worst insanity. Truth be told many prayer supplications.  It is just possible that I was going into oblivion.

Well the idea was planted, the dream was nurtured and the harvest is real and begins with the first leg of the odyssey.

Which Bike:
I knew it was a bike odyssey, but which one? One which in event of a breakdown,  would not require me to fly a specialist with a laptop to fix it.  There were many good choices: BMW 650 GS, Kawasaki KLR 650 and Suzuki V-strom 650. It was like writing an exam with one goal in mind ― passing the exam. Now I read and reread almost endlessly. I visited almost every dealership  in the city, and fondled each of these bikes, and spoke anyone who cared to give information about each bike.

By July 2008, having saved some money, the day of reckoning arrived.  I had been persuaded, and I persuaded myself that Suzuki, the colour of an egg's yolk met all my expectations. Some called it the 'V-strom' and others the 'Wee-strom'. The Stromtroopers were instrumental in putting me on the saddle of the Suzuki 650.  Somewhere, I read of a biker who had ridden the 650 and put on the odometer some 500 000 odd miles ― this is stuff of fairly tales.  That was the kind of bike to covet.  Scorpion, for that is what she was finally named became a  dearly cherished amigo. 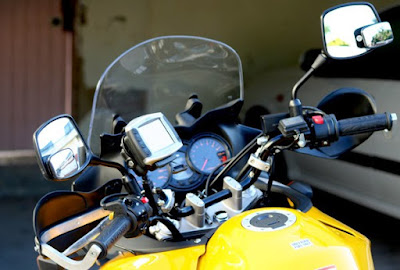 In the biking community there is a belief that the right riding gear is a matter of life and death.  Seasoned riders will tell you rather spend money on the gear than a doctor.  Looking back, I completely agree with this claim. 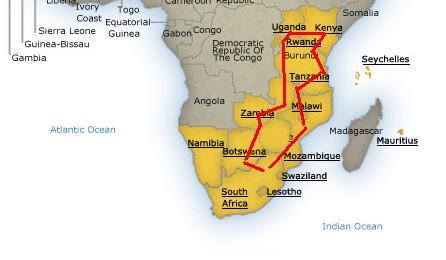 Mental Preparedness:
This was necessary.  This had been helped by the prolonged preparation, the awareness and acceptance of the risks involved.  Furthermore, I was partly helped by the moral support of family, friends and well-wishers including the Wilddogs Forum.  This web blog is a way of dealing with this matter.  I am simply saying keep me company. Every time I spoke about this odyssey, there were two types of responses: Lekker! Awesome! Or a silence and questions.  These responses did affect me.  You know my choice..

Bodily Preparedness:
Physical fitness is an absolute must.  I am an avid jogger and prepared myself for a long time.  I was grateful for this fitness particularly when I was ridding the Western part of Tanzania.

First Aid Kit:
I paid my doctor a visit for a check-up and to obtain the prescribed medicines for my First Aid Kit. Let it be known that items are chosen according to their relevance.
Read more »
at November 05, 2009 3 comments: