Although Rumonge was a large town by Burundian standards, I easily found Chez David. It was a large building in Victorian style in the middle of the business enclave. Since most folks in town seem to know it, I assumed it was a major hotel. It did not have running water, and electricity worked only for half the night. Despite this shortcoming, it was clean, well run, safe and with an exciting night life 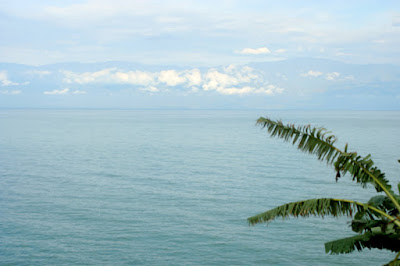 A View of Lake Tanganyika From Burundi
Papa Libanga who welcomed me hailed from the DRC; he was the receptionist as well as the manager — a very pleasant man in his late 50s. After securing a room, I had one thing on mind — to stuff myself. I told the chef I wanted a typical Burundian dish. It turned out to be my favourite grilled fish presumably from Lake Tanganyika served with baked potatoes. While the meal was cooking, I took a bath. It was a cold evening, so I requested for hot water which was delivered to my room in a plastic bucket. After a while, I returned to the foyer to wait for my fish. I took a look around. This included sampling some Burundian lager — Primus — in the biggest bottle I had yet set eyes on. I chose a strategic spot overlooking the foyer. I sat unaccompanied taking in details of the surrounding environs.

As it were, French, Kiswahili and Kirundi were the languages spoken so communication was possible with the first two. It was the first time I was in Burundi. Geographically, it was a very beautiful country lush green rolling mountains as far as the eye could see. The good roads provided for fabulous riding, which was what I was here to do. The people were very kind and generous.

I must confess that it was the country I least spent time with the local folks. But like Rwanda, its people had a fair share of suffering — the Hutu-Tutsi hegemony that had unfolded over the decades culminating in the death of President Melchior Ndadaye at the outbreak of the Rwandan Genocide. Vice President Jacob Zuma had brokered peace between the government and the rebels; the truce seems to be holding. It is this that enabled me to travel through the country that was supported by South African National Defence Force (SANDF) soldiers on peace keeping mission.

In art of living together (social contract), as long as one group of people seeks political, ideological, economic, ethnic or social supremacy over the other group, whether this is intentional or accidental, the very fact of this disparity is a blueprint for trouble sooner or later. This is the essence of Karl Marx’s analysis of societies beginning from the feudal societies to the capitalist societies. This primacy might manifest itself in different forms yet it basic character remains the same — power- control over the other. One needn’t look far in the annals of history to find plenty of evidence — the most recent being the genocide in the region of Darfur in the Sudan and of course Rwanda-Burundi. I was so occupied by these thoughts that I failed to notice that my meal had been waiting for me for sometime. So famished, I tackled the food — hmm the fish was absolutely divine! The best grilled fish I had eaten in a while; it was washed down with another helping of Primus. Fed and so worn out, I crawled into bed. My eye lids were so heavy with sleep; it was like lead was tied to them. The last thought in my mind was the appreciation of the day. It had been a most satisfying day. And then I passed out.

I was up early as was my custom. I had slept soundly. I felt refreshed and ready to ride another day. I had a hot bath out of plastic container. I had little to pack since most of my luggage had remained on the bike.

I rode off thinking I was most blessed to be riding this route. I had so far driven in lands I never thought in my wildest imagination I would walk one day. There was no doubt that Africa was a blessed continent: the people its greatest assets, the fruits of the land, the climate, the sun were some of its joys. Little wonder then that that historians claim it to be the cradle of human kind. 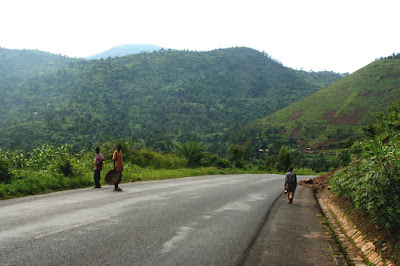 On Burundian Highway towards Rwanda
A couple of years ago in autumn, I travelled to Spain for a conference. I also used the occasion to tour Western Europe. I flew to London where I spent some time discovering the queen’s land, and eventually ended up in Seville. Following the conference, I visited the countries bordering Spain on mainland Europe. It was then while walking on a street in Portugal that it transpired that Europe would never be a home for me. It was a gut feeling. Make no mistake; Europe in many ways is a desirable place to be, but I knew it was not meant to be for me. And so going through Burundi today was the confirmation of my thought of years ago.

Lake Tanganyika was on my left and across its waters was the DRC. It did not seem like a terribly wide lake. One thing was distinctly obvious that the lake was sitting in the valleys of the mountains that surrounded it. It was the most beautiful sight. I wondered whether Burundians thought the same as I did. As I rode towards Bujumbura I stopped so many times to gaze and get pleasure from this amazing beauty.

I had been riding for 50 kms when I espied a woman with a small child on her back a common means of transport for children on the African continent. On her head were beautifully arranged clusters of ripe banana in a basket, the likes of which can only be found East Africa. It struck me how this traditional advertisement was so effective that I had notice it a distance away. I did not have much space on the bike but I thought I would buy five bananas for breakfast. When I enquired the price of a cluster, she said it was two hundred Burundian francs. Well I needed five fingers only. I gave her a thousand francs. I said she should keep the change but give me only five bananas. It was about 8:00 o’clock, and in East Africa it a common belief that if luck comes your way in the morning the rest of the day will be blest. It is impossible to describe the totality of the joy on her face. I had virtually paid her for the entire basket but only taken five bananas. The small crowd that had gathered thought she was so lucky. I believed that in giving, I am also given. I had received so much and yet so much more was yet to come. I rode off a very cheerful man and with five bananas to fill my stomach.

As I went down the highway, there were soldiers either in pairs or small groups. Burundi was just emerging out of war; this explained the presence of soldiers everywhere. In spite of this scenario, it never occurred to me for an instance that my own safety was at risk. My mind was entirely applied to riding and that was my preoccupation. Of all the countries I rode through, Burundi is the one that gave me the most pleasure. Riders will be familiar with ‘twisties’. It was like you were going uphill or downhill in a circular motion. In high speed this was pure bliss. My ex-fiancée had once described this experience as ‘orgasmic’; I couldn’t agree less. Scorpion was up to the task and I matched her with equal enthusiasm. This might sound dangerous and it was for most of the part; yet, the thrill of beating drivers thinking that their big Land Cruisers could out-compete a big bike on those twisties merely added to this experience. Scorpion was not just any bike, she was built for this purpose and she was in hands of a capable and experienced rider. In our love experience, every time I massage her into taking those twisties, she yielded with passion and without reservation. Battered as she was, she gave me the orgasmic experience.

I could come behind a driver and just hung there. Some drivers would not let me pass but instead increase their speed. The way a car handles twisties is very different from the way a bike does; twisties are more forgiving on a bike. I would lean the bike and still take a corner at 120kms or more. It was scary; very scary but there-in was thrill. I would pass those drivers and they wouldn’t be able to tell what had passed never to see me again. In this manner I reached Bujumbura.

Just before Bujumbura, I was stopped at a check point. It reminded me of the 70s during Idi Amin’s Uganda, of dangerously looking men hooded behind dark glasses typical of the secret service. This one asked me question after question and checked every paper. When he finally let me go I was in a very bad state of mind. Well I did not know why, but I thought that era was gone where men in glasses were a law unto themselves. For this reason, I filled up my tank and left Bujumbura immediately for Ngozi, Kirundo and finally towards Kigali.

At the border I could see signs that the East African Community (EAC) was alive and working. Burundi and Rwanda were the new members of the community. They shared the same building which was brand new. One side harboured the Burundian immigration, customs etc., while the other half was for Rwanda. The services were efficient and in no time I was riding towards Kigali on a brand new road; it was about noon.