I went to bed late and dog tired; it had been a busy day sorting out money issues, medicines, last minute chores. It wasn’t a laboured sleep but also one not so smooth as I drifted in and out of sleep.   I woke up the following morning, loaded the bike and hit the road.

A group of friends were waiting in Gaborone, but among other things, exhaustion set in. I guess it was the tension of having to prepare for the trip. I decided to spend two days in Gaborone. The good news though: The big day had at last arrived. 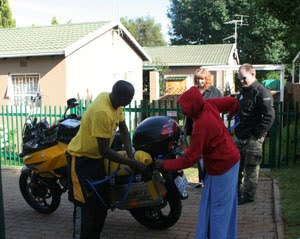 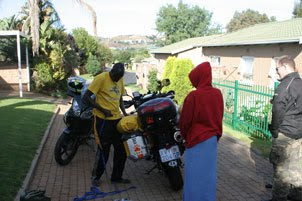 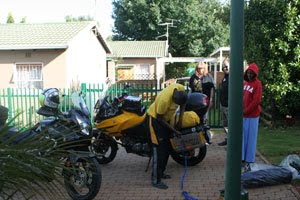 I had not done all my packing when I went to bed. I woke up by 4:00 a.m. to complete this most cumbersome task. While I was showering, the troubling question was: How do you pack things you will need to last seven weeks on a bike. I had read on the Wilddog Forum about what to include and exclude. The ideal is always easy to talk about, but I’m afraid quite divorced from an actual trip. I had to take food and bike emergency stuff, gifts for folks, etc, yet you can only carry so much. In the end, with the help of Fidele, my brother we loaded Scorpion. 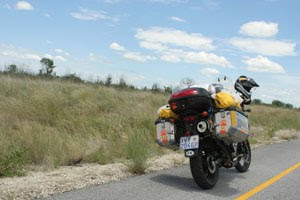 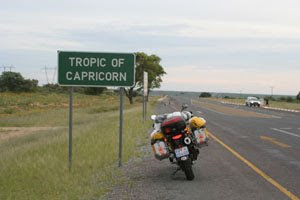 First crossing of the Capricorn 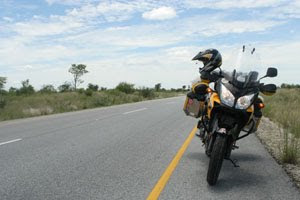 Great Skies
Meanwhile, Andy had agreed to accompany me to Tlokweng border (Botswana). In all the time I have known him, if he says 7:00 it means 7:00. I was annoyed with myself that I was only 50% ready when he roared onto the driveway on his DL 1000 Vstrom. The worst thing to do was to be uncharitable to a friend going this far. Let me spare you the details. 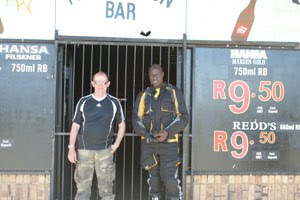 Andy and Myself before we Parted Ways 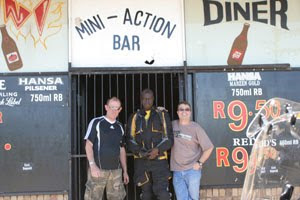 Andy, Myself and Etienne 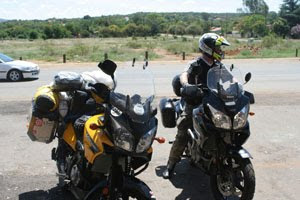 About three weeks ago, I decided to involve some form of media in my Johannesburg-Kampala Odyssey. I communicated with Udo Caralse – 702 Talk Show presenter. So yesterday morning I was back on 702 radio to happily announce to all ‘johannesburgers’ of eminent departure that morning, naturally this ate into my packing time.

During the packing, I could not remember where I had kept my dollars. You know how things tend to go wrong at the last moment. I had the money in the morning, but now I just could not find it. Fidele, his loving wife and I looked everywhere but all in vain. If I needed anything now it was intense focus and deep calm. Some minutes later I remembered the money was in a side pocket of my camera bag ― the relief was enormous.

Andy and I agreed that our departure was scheduled for 8:00 a.m. I wanted to officially start off from Wits University. We were running late. I was hungry and had last eaten the previous evening. In haste to start on time, I forfeited breakfast. I was amazed where I got all the energy to keep going.

It was clear except for some mushroom shaped clouds hugging the sky. A hot day was in the making. Clad in my riding gear, it was a spectacle seeing my neighbours coming to bid me farewell, beginning with Grahams, then Paul, then Jennifer and finally I hugged the Fideles and slid on the saddle onto which I had tethered my Airhawk to massage my sitting apparatus during the many and long hours of sitting in days to come. I need to say that the Airhawk is one wise investment I made with reference to extras on the bike.

Without much ceremony we roared off and surprisingly we were on time. We were at Wits School of Education in 20 minutes. On arrival, I set the GPS and adjusted the odometer to count from zero. At 8:05am. We rode-off down Empire road towards Soweto and eventually Lichhtenburg to avoid road tolls. We cruised mostly at 120-140kms. Then it hit me for first time that it was real ― the odyssey.

Our first pit-stop was at Lichtenburg for petrol and a cold drink with Etienne who was to accompany us to Zeerust. The ride to Zeerust was eventless. Andy and Etienne bid me farewell; we parted ways. I don’t know if I felt the loneliness overwhelm me at that time because I’d always banked on Andy in case of breakdown. One of the last things he gave me was a repair manual. I did not want to think of it. I kept it away and hoped I would never have to make recourse to it. Without much ado, I set off for the border post. Cruising at a constant 120km I soon got to the Tlokweng Gate. I parted with 110 pula on the Botswana side, and my green light ushering me towards Gaborone came on. It was scorching hot. I was sweating very much.

In South Africa, I had relied on my phone for communication. Now I was alone. I needed a phone to call my friend. At my first stop, I had 100 pula, the call was 1 pula for a minute. Always carry small change; it saves a lot of discomfort. I rode to Riverwalk shopping mall. Remember I was hungry; I knew something sugary would boost my energy levels. Ice-cream – the joy of ordinary niceties! In that sweltering heat, it was the most desirable thing.  The V-strom, especially a loaded one is a captivating sight. I think it is true for all bikes. They are always a spectacle to behold. On the panniers it reads ‘Johannesburg’ – ‘Kampala’.

“So you are really going to Kampala?” a man asked.
“Hmmm,” I mumbled between mouthfuls of ice-cream.

Later, I asked him if I could find a public phone. He said I could use his cell to call my friend, Jonathan. For the complete stranger that he was, with loads of generosity for yet another stranger, I was totally humbled. He later took me all the way to my friend’s place, where I had a cold bath, braai meal and a warm bed. I simply passed out; ‘slept’ would be an understatement.

For the next two days, I rested.  On Saturday, I woke up feeling like I had borrowed someone else’s body. Fatigue to the bone connived well with Jonathan’s encouragement for me to rest. The Livingstone leg of the trip could wait, the company of friends Jonathan and his loving girlfriend was too much to forfeit; not yet! More important, I had time to tell this story. I had ridden 469kms and used 28 liters of petrol. 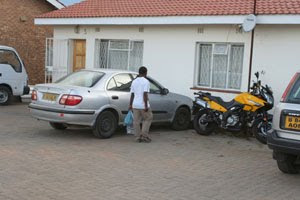 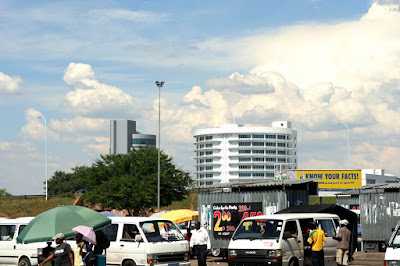 Patience and a Calm Head:
The 4th of December 2009 is the departure date. It has been hectic by way of preparations of all manner: breadth, width and depth of all kinds of huddles and blessings.  You will better appreciate this state of affair, it takes much focus and energy from one. 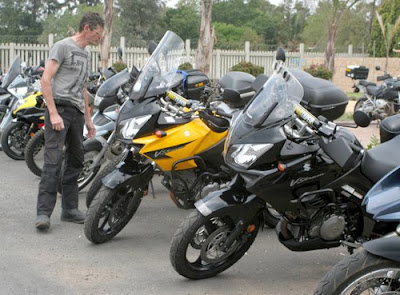 As days crawl by, there were endless little things to prepare to be trip-ready. First it was the bike, new tyres, new sprockets, new chain on the one hand then new oil, new antifreeze in the radiator on the other hand. Then Andy ― my friend ― gave Scorpion a microscopic inspection: tightening, what needed to be tightened, oiled and lubricated those parts which required such tender care.

I have always complained about wind buffeting even though I have the tallest screen in Gauteng, according Andy.  In his generosity, he fitted an Aerotrim.  There have been debates about its effectiveness, here we give these debates a wide berth. My experience is that the buffeting is significantly reduced ― 80%.  We often joked that if it does not work, we will retain it on the bike for its aesthetic value.  All said and done, it is my view that no one could have given Scorpion such tender loving care as Andy. We know that going into Africa is a herculean feat, while it is true that no amount of preparation can eliminate all eventuality, better preparation was necessary.

I have gone through various emotions in the last few days. This is best described by some of the events leading to the Odyssey.  Three weeks to the Odyssey, the bike developed a  stating problem. Turn the key, hit the start button silence.  About the same time it developed a sort of mysterious and ominous problem ― water in the bottle attached to the radiator was continuously emptying.  Then the clutch was not feeling right. Was this a real problem or a figment of my imagination.  I have done so many things in my life but mechanics is not one of them.  You can imagine that I was beginning to get a bit hysterical.  Men tend to keep these things under the surface. Well then riding back from the BMW training grounds at Swartkorp, I realized, or rather heard the something was wrong with my rare brakes. The pads were missing; I mean nothing completely. Where had my pads gone?  And why must these things begin to happen on the eve of my departure?  Andy's calmness helped keep my sanity.  He always had the right answer to these problems. There are more issues I would like to talk about but your patience will be reward at the end of this trip. The point is this is just one level of problems ― the machine.  Many more lay in wait.

Yesterday, I spent time with Scorpion.  With tools around Scorpion, I fixed, washed and polished Scorpion.  I did something carefully and with special attention.  I knew that for the next couple of weeks, she will have a bath.

The fun part of it was that at the end of the day I cooked my favourite dish: baked Irish potatoes baked in butter, with roast rump in butter and salt. The salad was chopped English cucumber and sliced tomatoes ― and with a glass of champagne, my feet hang on a stool.  Grateful to have my best friends with me that evening.  The relaxation was complete and necessary for tomorrow.  And in this way I passed the rest of the evening.