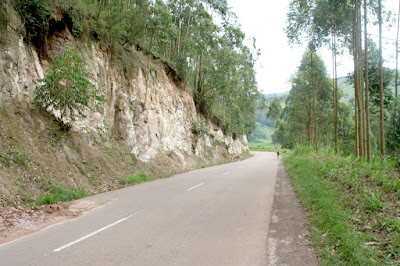 The countryside of Rwanda
Sunday was overcast and a gloomy day; it turned out to be utterly uneventful. I stayed in bed for a while, but later spent the morning washing my Firstgear riding gear to rid it of dirt, mug and odious odour. There was a problem though —water was a very scarce commodity in Kigali. It disconcerted me that the Great Lake Region, rich in water bodies and lying at the equator was plagued by incessant water problems: scarcity and pollution. In Kigali all of it had to be bought for my washing. By contrast, Johannesburg has no lakes, its water is imported from as far as Lesotho, yet in the seven years I have lived in Jozi, never have I experienced any water problems. The water is clean to the extent that we drink it from the taps; it never requires any boiling, filtering or treating. So one wonders what makes the Lake Region different. Why can’t the responsible authorities do the same? The quandary as I have always argued is management and all the attendant troubles. Problems of services delivery are associated invariably with management. Bad leaders don’t deliver. 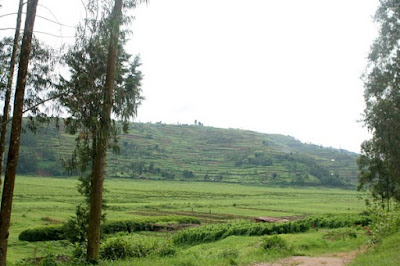 Tea Estates of Rwanda
Another matter occupied my mind. It was time to resume the odyssey — to Uganda. Territorially speaking, I was about to hit the halfway mark of the odyssey. My feelings about the sojourn in Rwanda were mixed. I had definitely enjoyed being in the country. It was a wonderful beautiful country made of wonderful people who had out of sheer will and desire survived and outlived the Genocide. It was something to talk about — indeed a remarkable feat. We had all witnessed the tenacity of the human capacity to beat all odds in order to keep the species and the nation going. It was a place, I convinced myself, I would visit in the future. Yet in spite of these pleasurable sentiments I was troubled at heart. I was troubled because I had come to visit Esperance all the way from Johannesburg. But she had shown little appreciation. When a visitor especially one coming from so far away arrives, don’t you play the host? Don’t you at least smile? Or must it be in the spirit of the old adage: “call a spade a spade” and give the supposedly offending visitor a cold shoulder? I was cold shouldered. I still I have no answer. Since I did not know Esperance as a person, I let the matter be. Still I remained disturbed. I could not shake off the feeling. I argued with myself: how could she be so cold and aloof. What about African hospitality? It is not a universal virtue. 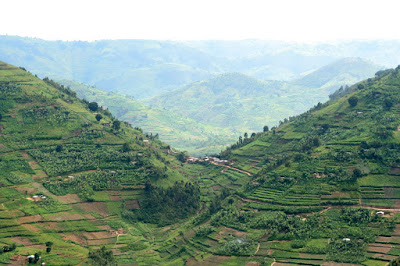 The Countryside of Rwanda-1
In this mood I left Rwanda: the country and people I had so much come to identify with. The evening was long and boring. My imagination refused to come to my aid. I had one thing on my mind: to leave first thing in the morning.

Fortunately, I slept sound and deep except for an occasional infuriating buzz from a mosquito. I have learnt in the course of growing up that when I have a problem, I may agonise, rationalise, and in extreme cases loose my appetite; but sleep is one thing I never surrender. Problems go away with time, so why not retain my sanity so that when the problem is gone, I am still the healthy jovial person I am.

At the first light of the day I was ready to depart, but I needed some cash to take care of sundries. At 7:00 o’clock Muhire and I rolled into the city centre, exchanged dollars for Rwandese Francs and set off towards the border. My host accompanied me for 70kms. We hugged and bid farewell to each other. I departed heading north. Muhire was such a decent man. I wished the sister too was decent. 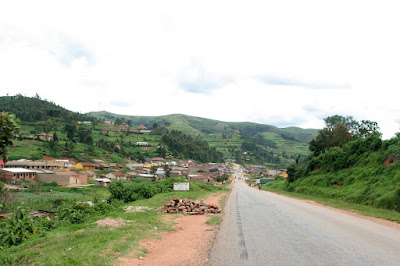 Inside Uganda
Today my intention was to ride hard. I assumed that I would be in Kampala by lunch time (13:00 hours), I was so wrong because I arrived only at 18:00 hours. In slightly more than an hour I was at Katuna border post. It was a smooth ride in a beautiful country side surrounded by high hills covered in lush green forests, tea fields, among others. The road was in a good state although busy since it was part of the Great North Road. The border had many hauliers going both directions; but in ten minutes I was on my way again. The immigration officials and the police officers were very polite and friendly. I rolled into Uganda in style. Obviously coming on a huge bike was not a common sight, and for another reason; I was a son of the land returning home. As it were, in this part of the world, the most common bikes are 50-125 cc. The big bikes are usually police bikes in the VIP motorcades.

On the Ugandan side, I had to clear customs before proceeding to immigration. The officer was extremely kind and I thought very sensible. He checked my papers; I paid about 20$ for tax. The colleague of the custom officer helping me tried to solicit a bribe out of me by persuading his colleague to make entry difficult for me. I overheard them arguing. The man helping me said that he was not going to compromise his morals. It was extremely gratifying to learn that there are people who have ideals and values that they hold. It is common knowledge according to the World Audit (2009); Uganda is the 74th most corrupt country in the world. So I was not surprised by this attempt to profiteer from me. 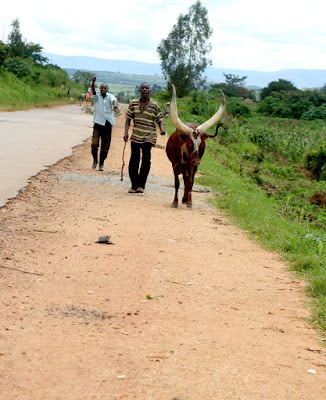 The Famous Ankole Cattle
I left the border determined to enjoy the ride. The roads were not as good as those I had left behind. They were very bumpy because of the bad patch work. They were also very narrow. I could not understand how Rwanda had better roads compared to Uganda for obvious reasons. There were very long stretches of bad sections and sometimes untarred parts. I can say with much confidence that of all the roads I drove on, Uganda had the worst road system. In spite of this, I was enjoying the scenery of rolling hills shrubbed in lush green. I rode though Kabale and Rukungiri. Towards Mbarara the landscape turned arid and uninteresting. Of all the riding I had done and was to do, this stretch was the most boring, laboured and left me feeling vulnerable. I stopped only to refuel and to eat. I took no photographs, and was especially angry that I had failed to photograph a man daggling the biggest and most magnificent catfish and tilapia I had ever seen. It was a lost opportunity. In this mood I rolled into Kampala. Fred my brother took me home where I slept for the next four days.