How the End Begun

Although I have never finished my story, there is an end to every beginning.  One such end came many moons ago, when a middle class Yankee well in his retirement fell in love with Scorpion 1. He wanted to travel through African and Europe.

But first, there are many kinds of truth.  One of these for me is Scorpion's great friendship, mistress and companion.  In the many glorious days we spent together, I had put about 45,000km on her. She was a work horse that had simply served her master beyond reproach. Before our relationship, I had shopped around, and eventually settled on a Wee Strom DL 650. That was many years ago.  In those days, it was simply the best thing I had ever possessed.  We had a relationship: it was time to let go.  It was the most agonizing decision. I could not stop the tears.  We all do when our relationships are threatened.  Some cynics might cry out, but she was just a machine.  True, this one is not in dispute, but what about the stories we wrote together during our relationship, the many hours we spent in each others' embrace in the middle of no where, the tumbles, the rain, the mud, the dust, the people we met, the many rivers we crossed, the the mountains and valleys we traversed, the very long straight roads that seemingly had no end, and the times we spent at the mechanics to fix her.  Surely these little memories become part of one's psyche -- the story of a endless love between man and machine.

I told Tom, for that was Scorpion's new friend and owner, he could take possession of Scorpion on condition that he loved her.  Thus settled Scorpion became the mistress of Tom.  From the very beginning, Tom violently fell in love with Scorpion. When a man spends a fortune adorning his mistess, you know love has no bounds.  She became the most kitted bike I had ever seen.

And for many years she lived in Germany, and every now and then, Tom would reunite with with her and ride around Europe.  Tom's story is told in these pages: Tom Richardson's Adventure.  Sadly Tom passed away Nov 2015 from Pulmonary Fibrosis.  He had written to me about a week earlier saying that was his last email.

Tribute to Tom -- His Words

Ten years ago, I decided to ride motorcycles; I just turned 72 and got a diagnosis that suggests I'm not going to see many more birthdays. This may be my last adventure on a bike. I'm going to get on my Suzuki DL650 in Germany and head for Ukrania to see what's up for myself. Romania, Moldova, Bulgaria, maybe Turkey and Greece, then up the coast of the Balkans to Croatia for time on the beach before coming home to USA again. Up to now, I’ve lived a charmed life. Married well, enjoyed raising three children - now stretched to 7 (it’s complicated) with great spouses and grandchildren. I've traveled a lot - much on a motorcycle, benefited from a middle-class American income and the accident of my birth in a country whose better off citizens have a measure of freedom to think and act, and I’ve owned far too many toys. I enjoy discussions about politics, religion, economics, environmental issues, ...lots of things. I eat too much and in spite of it I'm still pretty healthy -- except for this latest thing, which seems to have no explanation - or cure. I'm enjoying the trip; wish it was less close to being over."  He said "life is short", he lived it to the fullest.

Scorpion with Tom in picture at the bottom of Africa - L'Agulhas in happier old good days. This year 2014, Tom wanted to ride around Eastern Europe: to Croatia all the way to Ukraine. But he was diagnosed with pulmonary fibrosis.   He had to abandon his trip at the beginning of May when a doctor voided his travel insurance in Germany and the rest of Europe.  This wonderful youthful old Yankee said in his blog "Life is Short" and he was the kind of man to live it to the fullest.

Tom is one of the most generous people. Almighty bless you Tom!. Tom give Scorpion to some Irish man in Ireland. May Scorpion bring you bliss.  Beyond this, I prefer to remain in the dark.  Sometime the good memories are preferred and cherish.  It is better it remains that way. If I had my way, I would bring back Scorpion to South Africa.  But alas such is life!  Tom you be blessed!

Meanwhile, I have never embarked on any serious adventure since my last one.  I hope one day, when I am still full of juice, I will do so.  Even then I have put 90,000 km on Scorpion II.  A large chunk of it doing Roadrangers Stuff.  I ride with cyclists to keep them safe on our dangerous SA roads.

If I loved Scorpion I, I loved Scorpion II even more.  You can see her below in her middle age.   I'm grateful to all of you, 15, 963 odd souls who have peered into these pages.  Even though I'm no celebrity, life has been good .  Every one writes their own stories; this is my story and how I wish to tell about myself.  I became part of your story and you yourselves became part of my story.  One day I hope to tell you some more stories about my travels to yonder lands. 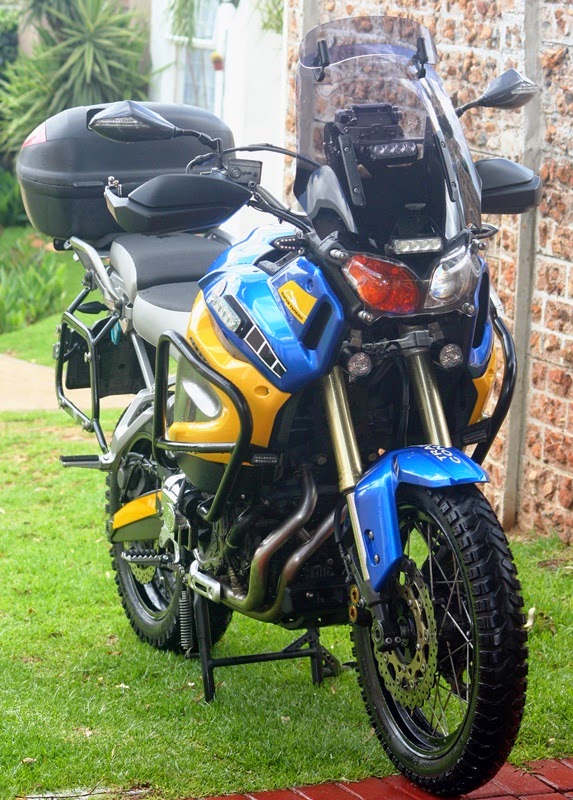 Scorpion II in her Middle Age

Technology changes and there are ever newer and better bikes on the market.  I sought one such bike. This time one with lots of power and a shaft.  The XT1200Z, Yamaha had just been released, April 2010.  The dominant bike in this category was 1200 GSA.  I rode these bikes for a while and determined that I was much happier on the Yamaha.  I can tell you in retrospect that my gut feelings are seldom wrong.

So when Tom came along and rode away on my Scorpion I, I knew I had to carry on my dream of travelling to yonder lands.  Soon I was the owner of my first Yamaha.  Make no mistake, I reluctantly, very reluctant to let go of Scorpion I.  It was a decision based on hard economics even though I would have loved to keep her, and the wisdom that a seed must die to give life.  I have many nostalgic moments when I get lost in reveries of the ol good days with Scorpion.  And sometimes, when I think of her, knot forms in my guts.  I suffer from something I have learnt is called overwhelming symptoempylaisis  nostalgia.  But again these pains are lessened by my new love.

As it were everything has a beginning and an end.  Tom as it were succumbed to pulmonary fibriosis on the 5th of November 2015.  He rides on in yonder land.  His body might have given in to the laws of nature, but his spirit rides on.  Go well my ol friend.
at September 15, 2014 No comments: