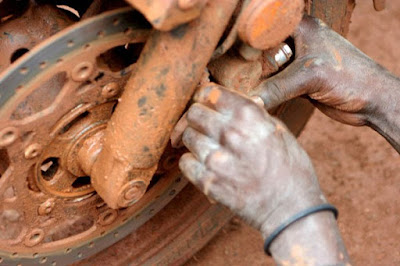 Changing Brake Pads
I had slept deep and sound with very few cares. Riding from Mitumba to Uvinza had been the toughest ride of my life. It tested my will, my physical endurance, my riding skills as well as Scorpion’s abilities as a machine of exceptional engineering. Yet, it was also the most adventurous and exhilarating. I was happy to be doing something close to my heart notwithstanding the perils involved. I refuse to live a boring life. I refuse to drift like a piece of wood downstream after a heavy down pour. I have never been a drifter. I have resolutely chosen the direction I have wanted my life to take at every turn. My secondary school history teacher use to say: “Every individual writes his own history and that is what the world reads”. This history emanates from the choices one makes be they good or bad choices. When I set out on this odyssey, the support from my friends, funs and family was a mélange of different emotions and attitudes. Charles my brother had categorically said no: in his view it was too risky. Little did he know that a company that takes out travel insurance would echo his very words. Some of my very Christian friends had reiterated similar sentiments. The response from my riding partners on the Wild Dog Forum ranged from very hot to lukewarm. I could sense extreme eagerness and support to palpable fear and indifference for a variety of reasons, but there-in-lies the difference. There are folks who wait for things to happen to their lives. That has never been my style. I have always made things happen to my life. When a travel insurance company declined to insure me claiming it was too risky an investment, I did not weep and mourn. I simply set out on the Odyssey; here I was today at Uvinza. I was in an upbeat spirit and in the mood for the next leg of the trip. I had remained in bed for a while assessing the previous journey. In sixteen years of riding I had as many tumbles in one day on the same stretch of road. I chuckled remembering the consternation, the panic, the tears, the darkness, the rain, the lonely road, the exasperating insects and the fact that I was drenched from the neck to the toe of my boots.

I think part of my excitement was to do with my new destination. It would be the first time I was visiting Burundi, which was about 150kms northwards. I was looking forward to the ride with anticipation. I refused to take anything for granted. 120kms was apparently a short distance but yesterday’s experience had firmly convinced me not to underestimate the terrain and the elements. Much as I love Tanzania, I had had enough of its beauty, the hospitality of its people, roads and air. I had one thing on my mind — to get out. So I planned on setting-off at the earliest opportunity. I was feeling hungry; I had to eat something. 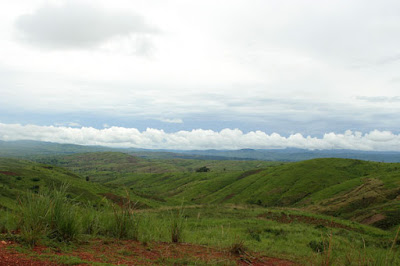