Crossing the Frontier Into Burundi 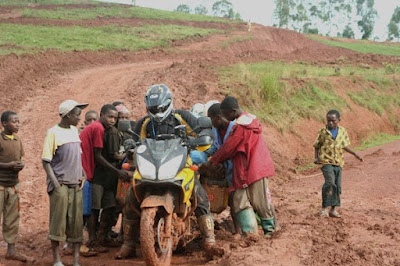 Frontier Crossing
Northern Tanzania is without a doubt a living Eden. Yet the mud and the rain were seriously encumbering my ability to fully exploit my enjoyment of the scenery, since riding was reduced to ensuring that I survive the slippery roads. I reached Kasulu resembling the colour of the road I had been travelling. My immediate concern was to find a mechanic to change my brake pads. I had, by God’s grace, just covered some 70kms of the some of the slipperiest roads I had ever travelled on almost none functional brakes. I came across a young man who boasted that he was the only mechanic in town who could change my brakes pads. I was wary of a boasting mechanic; I simply rode-off leaving him speculating whether he had said something that offended me. 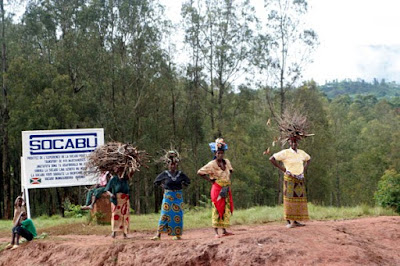 Even The Women Got interested and took a Moment to Observer
The kindly folks of Kasulu directed me to another mechanic who changed the brakes in less than 10 minutes for a fee of 5$. Again, a crowed of young men around me was massive. I rode away thinking: Was this mass of loitering young men not a recipe for crime? In Johannesburg, if I came across a group of teens I would change direction. One evening, with my friend Horman who was visiting from Durban, I went out to shoot a sunset panorama view of Johannesburg on Kensington memorial hill. While on the hill one can see anyone approaching it from any side. I kept an eye on a group of young men who were on the road below. When they came up the hill, I was scared stiff. I packed my gear and we hurriedly went downhill on the same route they were using to come up. We knew we had to keep calm. The only weapon we wielded was the Silk tripod weighting 3kgs. It was a formidable weapon. I carried it in such a way to leave no doubt that I would use it in self-defence. At 6.1” tall, I must have looked menacing. One factor was in our favour namely, the speed with which we packed and hurried downhill. I could see the dismay on their faces. I think they had not counted on how quickly we would respond to this perceived threat. I held my breath when we went past them. One of them mumble something, but I was so focussed on getting away from them that I kept going. A Congolese friend had been recently knifed in the back and died of his wound. In Johannesburg one will get killed for a mobile phone of less than 150 rand. These were familiar stories. We did not want to presume anything. When we reached the main road at the bottom of the hill, to our horror, we saw that the teens were following us. Our hunches were right; it was a suspect group. We bolted as fast as our legs could carry us. 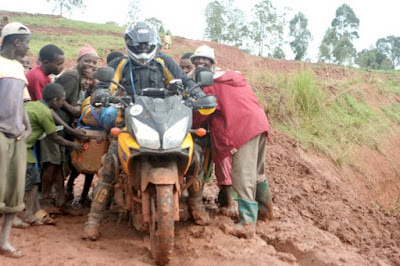 A Very Scary Moment Going Downhill
Preoccupied with these thoughts I was just hitting the outskirts of Kasalu when I came across a police mounted roadblock. It was not the first roadblock I had come across, but it was the first where I was asked for my international driver’s licence. It was a youthful policeman making this demand. In my experience, youthful police officers keep the law to the letter with zeal and zest in the name of serving mother country. I have always had problems with them. In this state of mind, I took my time to dismount opened my topbox and asked him what other documents he wanted. He said, “Just the licence”. I looked him into the eyes and asked in his language whether he thought I could possibly come all this way without a licence.

I was not interested in his answer. I was soon on my way. A few kilometres down the road, I became aware of a noise from my chain. I knew it was so dry hence the noise. I stopped to lubricate it. Once again, I was on my way riding through beautiful rolling hills towards Mabanda the Burundian frontier about 90kms away. The road improved so that for the first time in two days I could ride at 70kms per hour stopping only to photograph the scenery. The rains were also forgiving and never fell until Christmas day. But my woes were not yet over — for the roads were still in a fearsome condition. I would meet with the mother of these conditions soon after the border crossing.

Today was the seven days since embarking on my odyssey. I was glad that after two difficult days of riding I was going to sleep in a different place and in a different country. This piece of tiding was incredibly pleasant, and so in a cheerful state of mind I resolutely set to complete the rest of the trip. 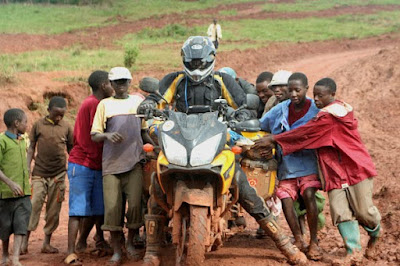 We kept trying to Go Down Slope
I arrived at Manyovu boarder (Tanzania) about 2:30pm. It was the only place I was asked for my vaccination card on the entire trip. Custom’s clearance was quickly settled. I was in such a jovial mood that I parted with 10$, ‘donating’ it to the custom officer. I think it was the joy of leaving Tanzania behind, but in truth he was also a very affable character who genuinely asked me about my trip. I cleared immigration and the last of my problems started immediately.

Mabanda was 500m from Manyovu. To get there, I had to go round a bend and downhill at about a 420. To compound this state of affair, a Chinese company constructing this road had recently dug it up. Since it had been raining all morning, there was thick mud everywhere. Even the custom official said that it would be a miracle if I crossed to Burundi.

As I came round the bend, a group of about ten 10-15 year old offered to help for a fee. How could I possibly refuse! They attached themselves to the bike on both sides and the controlled slide downhill begun; that is how it felt. They pushed a little at a time. In one sense it was like skating but at very low speed. All the while I felt like my heart was beating in my throat afraid that any time the entire bunch would end down-hill in a heap and possible destruction. But these kids were adept at what they were doing. I put my faith in their little hands. But my faith was tested for the first time on this journey. It was very scary to say the least. It took us close to 45 minutes to descend to the bottom of the hill. At last I could breathe a sigh of relief. I looked back and could only shake my head in wonderment: How did we make it to the valley! I settled my bill and off I road about 5minutes to Mabanda.

Covered in mud, I knew I was an awful sight by the way the soldiers at the border looked at me. I had last spoken serious French in 1997 in the DRC. I was now in a French speaking territory and did not know if I still remembered any of it. You know how sometimes you speak confidently thinking you are saying something sensible while you are unknowingly using obscene language or simply giving a wrong answer. I remember my Ethiopian friend Tesfay who was asked “Comment tu t'appelles?” (What is your name?). And he answered cheerfully: “Je ne bois pas de bière”. (I don’t drink any beer). This was hilarious and we often joked about it for a long time. Bonjour! I called out. “Passéport sil vous plait” the immigration offer requested. My passport was stamped and I was soon on way. I thought I would ride to Bujumbura but that was not to be as you will soon discover. I also had to clear customs at Nyanza about 30kms away which was my immediate destination. 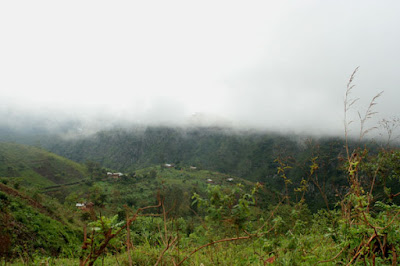 The Misty Mountain Side of Burundi
I was able to keep a constant pace of 80kms per hour. I arrived at Nyanza at 4:40. I paid customs 30$. I met an elderly man probably in his early 60s who was extremely polite. Once he knew where I was coming and going. He said my son welcome home. He took me to his place and had me wash some of the mud off. He made some tea and only after having it, did he allow me to go. I obtained some Burundian Franca and I headed for Rumonge. My host told me that I could not go to Bujumbura since the road closes at night. He also gave me the name of a lodge, Chez David, where I was to reside for the night. 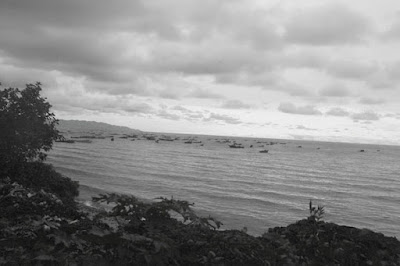 Driving along Lake Tanganyika In Burundi
I glanced at the GPS; I was riding some 2400m above sea level. Up in the mountains and looking below was a breath taking sight. The mist in some places was so thick that I could hardly see more than 10m in front of me. As I descended down the mountain, the tarmac road turned towards Bujumbura along Lake Tanganyika. It was a delightful sight. The best part of it, however, was the hero’s welcome I seem to receive in every little town along the way. Everywhere I passed I was given an ovation. I couldn’t help throwing up my leather gloved hand to wave as long as I could and put on an air of a hero. After days of tumbling, my welcome to Burundi was befitting. I was in the glow of merriment. In addition, it was thrilling to learn that I was the first rider on a V-strom to visit this part of the world. 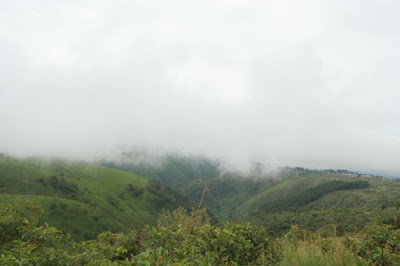 Sheer Beauty
Remember Burundi in most of the 90s and recent times was in a state of war which eventually subsided with the signing of the Arusha Peace Accord chaired by the then South African second in command: Vice President Jacob Zuma. But peace was still elusive; thus, explaining why I could not ride to Bujumbura in the night. I was relieved to reach Rumonge tired but very pleased with the last part of the odyssey.