My Love for Kigali 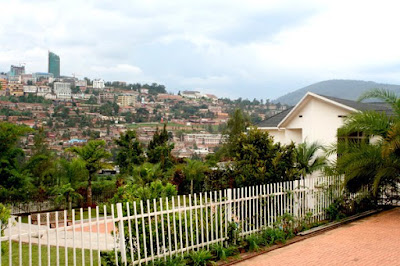 City Centre in the background and Kigali Memorial
I woke up feeling thankful. I had come some 4500kms. I was in good health and Scorpion was still running efficiently. As I lay on my host’s bed I planned the day; it was a Saturday. First, Scorpion was my chief concern; she needed of some attention. She was caked in mud; a thorough wash was on the menu. I also wanted to see Kigali, familiarise myself with political developments and find some entertainment.

Rwanda is no Libya in population. Though it is a small country, it has a population of over 10 million people, one of the highest densities in sub-Saharan African — 240 people per sq km. This was manifest as soon as I crossed the border: on the streets as well as the residential places were hives of people. Yet, I still thought Burundi held the crown — I had never seen as many people as I saw on the streets of Burundi.

Meanwhile, breakfast was simple: bread and tea. I would have preferred a plateful of boiled rice, cassava or potatoes for that is what I grew up eating. Whereas bread was European and tea was Chinese, these were in my view the ultimate colonial legacies. My conundrum was the mentality around these legacies. A case for argument: in my high school days to eat bread and drink coffee or tea was equated to being ‘civilized’. We all know this to be a warped mentality. By the same token, to speak English with a foreign accent was likened to being uncivilized. What was forgotten was that one comes from a cultural background, which unavoidably influences one’s ways of being. Speaking of ‘being’, one culture, plainly put, cannot be superior to another; it is simply different. If such a thing as a superior culture exists, it is merely a belief. We know beliefs are sacrosanct. 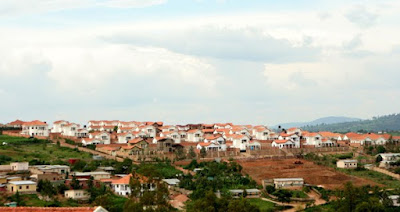 Housing Estate in Kigali
In the years I was a principal of a secondary school in Tanzania, it always amused me that my students, who had never been any where near America, spoke English with an American accent or shall we say spoke American English. Why was this so? What was wrong with speaking English with a Tanzanian enunciation? The Indians do it. The Russians speak English in Russian, and so do the Afrikaaners. Even Microsoft Corporation has come to accept the imperative of cultural differences, so that under language entries in its software are the following: English (UK), English (Zimbabwe) English (American), English (Jamaican), English (South African) because it is alright to be different. So what was wrong with being Tanzanian? I saw the need to deconstruct this mentality. One day I asked some students a question I supposed they still ponder to this day: “Have you ever heard an American speak in English or in Kiswahili with a Tanzanian pronunciation? I leave the rest to your fertile imagination.

Don’t get me wrong—I have nothing personal against my cousins overseas; yet, it is necessary that folks start appreciating themselves culturally. It is simply not acceptable that the more you sound like the queen, the better person you are. What defines a person is character, integrity, humanity and the like. In my view the lack of these are the sources of our human nuisances.

It seems I had wondered off in a mental reverie. Well, soon afterwards, Muhire and I set-off towards the city centre. It was a beautiful cool morning following the night down pour; the warmth of the sun was very delightful.

We soon arrived at car wash. What was unique about it was not the absence of high tech. Recall I was coming from Johannesburg, but rather the presence of basic old common sense. In bid to find employment for its youth, the Rwandese government had organised all street kid into some sort of associations. Car washing was one of them and motorcycle taxis (locally called boda boda) was another. In this manner, the Rwandese went far in solving crime and employment using common sense. In my view it was working, a leaf the city of Johannesburg could lend itself to solve some of its perennial problems.
For a fee of 1500 Rwandese francs, these youth scrubbed the mud off Scorpion. The mud was everywhere to the extent that to this day I have not been able to get rid of it completely. After two hours of waiting, Scorpion was sparkling and had regained some of her former glory. Then Muhire decided that we were ready to go site seeing. Life Went On — A wedding.
Kigali is built on several rolling hills. This however was not what impressed me. It was the fast pace of development, unmistakable in the construction taking place in the district of the city. A prominent sight is the tallest building marking the city centre — although nothing of the sort seen in the skyscrapers’ of New York. Furthermore, this conspicuous development is seen in the phasing out of slums and ghettos. The progression is so palpable that one can distinguish the new from the old. In Muhire’s words, the original owner of the land in the slum is given the first right to develop the land or alternatively is compensated money-wise, or given land elsewhere. All this construction was in keeping with the government’s 2020 Vision to modernise Kigali and Rwanda. It is common knowledge that because of the leadership of the government of Rwanda, things have tended to work with the efficiency of a clock. It is said that any citizen can telephone President Kagame to report a problem. Corrupt government officials of any rank are prosecuted and jailed. The police is a people’s police in the very essence of what they do. 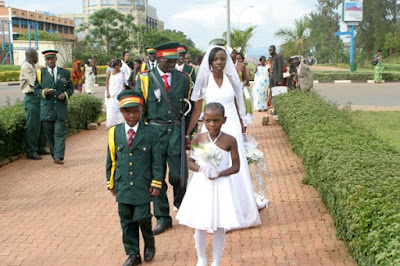 A Seventh Day Adventist Wedding
I have always maintained that the positive progress a state, a company, a family or any institution makes is rooted in the leadership who leads with a vision, passion, efficiency, discipline and integrity. These are virtues persons possess: — either one has them or not. It does not matter how popular one is, the direction of progress takes on a very definite character. An example in America’s political landscape will illuminate our minds. America has had forty-four presidents since independence yet only a couple of them standout: the founding fathers, Abraham Lincoln, Franklin Roosevelt, Harry S. Truman, and J. F. Kennedy; they made a difference. The ordinary man on the streets of Kigali will tell you with fervour that Kagame is their man. Why because he makes a difference in their lives. This is what leadership is about. Emerging from the genocide of 1994, it was possible for Rwandese to wallow in self-pity. Kagame insists that Rwandese must take self-agency seriously and change their circumstances instead of waiting for the government to do something for them. For instance — a very small example but one that shows the significance of the change of attitude — every month on a Saturday, all citizens are called to participate in a project of keeping Rwanda clean: everyone from the president to the humblest man on the street participates. Rwanda along with Singapore are reputed to be the cleanest countries in the world, a journalist claimed. 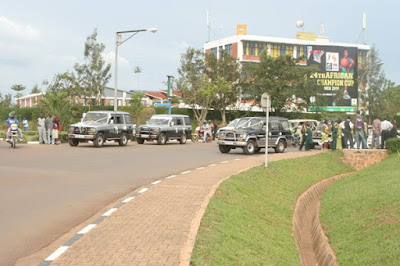 The Good Things of Life
That afternoon I visited the genocide memorial. To come to Rwanda and not visit the memorials is to miss a historical event that defines the destiny of the Rwandese people. There are many sites around the country but Muhire took me to Kigali Memorial Centre, organised along the lines of the Apartheid Museum of Johannesburg. The memorial tell the individuals stories of those who were butchered by fellow Rwandese from infants to the old, the weak, pregnant women and the infirmed—every one was affected. I walked into that building into total silence disturbed only by the breeze outside, the distant drone of car engines, birds chirping, my footsteps and my breathing. I paced slowly through the corridors and the rooms. Hundred of photos lined the walls, accompanied by narrations of the events leading to the genocide. Further on downstairs I came to a room bearing the remains — the actual bones of the genocide victims: hundreds of skulls bearing the evidence of a mortal blow. I had only the afternoon, but it was a place you could not visit in a rush. I had many questions racing through my mind. Honestly, I did not have answers.

I remember reading somewhere that after the 9/11 events, some Americans had questioned why God had allowed these things to happen. In my little faith, it was so clear; I couldn’t doubt that God had nothing to do with this. It was easy to shift the blame to some other source — in this case completely disregarding human capacity for free will and choice, which in my view God respects. But this is besides the point in this narration. My consolation, however, was that the true heroes were all the Rwandese people, who having learnt from the events of the genocide, had decided to forge ahead with their lives. I left the memorial that evening in a very pensive mood, but with even more questions. 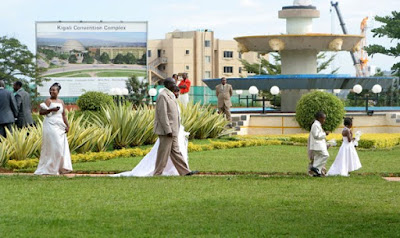 Wedding Match
The evening was not helped by Esperance's absence. I had come to visit her, having come all the way from Johannesburg;  she had gone off to a wedding returning a few minutes before I departed for the night. I was livid but kept my cool, I knew what to do.