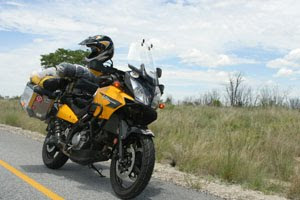 The Jewel on a Highway in Botswana

I fell in love, heel over head with Scorpion from the moment I laid eyes on her — she became the jewel of my heart. Yet being the scrupulous person I am, I still candidly weighed the odds of choosing her over a Kawasaka KLR 650 and a BMW GS 650. She had this appeal about her that made my heart pound. In considering anything that is going to be of a personal matter, reason and emotions must marry to provide maximum appreciation. Reason came from researching especially the stromtropper. Emotions came from the fact that every time I looked at her, she did something to me that other bikes did not — the essence of choice. I knew she was the perfect match and would carry my heart through eleven African countries. Well to spare you the details, we finally got engaged and married. I spent the rest of the time adorning her for the trip.

Come the departure day on the 4th December, she was simply ready to indulge in my fantasy. She seemed reluctant at first on our first leg of the trip — I guess because of the gusts of crosswinds blowing: 20-30 knots. However, once I set out through Botswana, she yielded to every encouragement I gave her. After riding 1085 kms in a couple of hours with spare capacity for more mileage, it was obvious in the depth of my heart that she was the lady of my life. She had passed that test and much more including being laden like a donkey but still possessing the ability to move effortlessly. 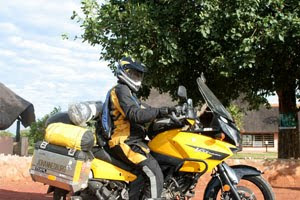 Scorpion  and Me a Spectacle in Mbala Zambia

I had never ridden her on unfamiliar terrain. The Livingstone-Lusaka opportunity put her to this test. But fear more than anything else pressed me into riding her as if she was disabled; understandably it was the unfamiliar terrain and the lack of experience on such terrain that were to blame. Once courage and confidence took charge of me; I let go. I met every road challenge with gusto. The road was being re-tarred and was in its worst state. It was full of potholes in which more than a quarter of the wheel would disappear. It had loose soil and gravel that made riding unbalanced and risky enterprise. Worst of all, it was wet in some areas with speed humps that you realised were there only after you had passed that spot Indeed on one occasion, I went over a hump and was almost thrown clear of the bike, but was saved by the way I held her as my lover. It was a firm grip on both the handle bars and the tank using hands and knees respectively. 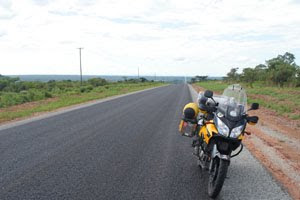 As far as the Eye can See ― In Botswana

Scorpion amazingly adapted very well; she firmly commandeered the road and took control of it. And with a mind that adapts, I begun experiencing the thrill of riding now that I’d come full-circle. I think it is a sensation that any one in a relationship with machine: pilots, Formula One drivers, speed boat racers, among others can identify with. Among other things, she was surprisingly nimble. She willingly responded with ease to my maneuvers to throw her around. Scorpion is not a super bike but she will outpace most average cars. What is more, her size allows her to be squeezed where most cars will go unenthusiastically.

Soon, I was out of the dirt portion of the road and driving kilometers and kilometers of tarred road running through thick forests. Sometimes I would push her into racing speeds of 180 km and sometimes come down to 90 kms. I realised that the best speeds for cruising was 120kms. It was pure bliss driving through Choma, Monze and Mazabuka where it started raining. This did not dampen my spirit. I rode on stopping only to fuel-up and to wear the rain-suit. Sometime before Chirundu-Lusaka junction, on a steep slope, a hauler truck had jack-knifed and blocked the road on both directions. You can picture me arriving and stealing the limelight for just that moment. Even those attempting to move the trailer had to stop to see the spectacle on the yellow bike go by. I was waved to pass and that moment marked the apex of my riding day as I gently eased the bike out of the mass of on-lookers.

In fair appraisal, it is right to say that Scorpion had one downside thought in all these maneuvers, if I was too happy and fervent with the throttle, she grew extremely thirsty.

I arrived in Lusaka about 5:45 pm (Monday). It was a bad time to arrive. Lusaka was in the grips of traffic-jam as every worker was trying to get home. Given my panniers, I was a lame duck moving only with the traffic, exhausted but having had a very satisfying day of riding and grateful to God for bringing without incident to Lusaka.

Let me say in winding up this episode that on many an occasion, Scorpion proved that I was right in my choice of her; she exceeded my expectations.
at December 16, 2009